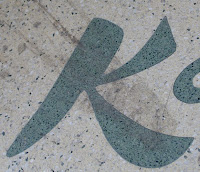 nowing all the facts might have helped my Sunday visit to the National Gallery of Art in Washington, D.C. I wanted to see the Publishing Modernism: The Bauhaus in Print exhibit, which showcases printed material from the Bauhaus School. To my disappointment upon arrival, I learned it is a weekday-only exhibit.

A consolation prize did catch my eye: Modern Lab: The Found Alphabet. Given my photographic focus, how could I pass this up? Shockingly, this is not a featured exhibit. I had to ask a security guard where to go. After winding through a few galleries, I found a broom-closet-sized room with about a dozen pieces of art.

While I wouldn’t plan a trip for just this exhibit, if you’re interested in typography, it is worth a look. A Claes Oldenburg painting called The Letter Q as Beach House, with Sailboat, is oddly self-explanatory. The work features a giant, upside down Q posing as a house, with sailboat.

But my favorite piece was a deconstructed newspaper by Canadian artist Kim Rugg. The work, No More Dry Runs, is a front page

of the Financial Times. All the letters are cut out and pasted back in alphabetical order. So FINANCIAL TIMES became AACEFIIILMNNST. A clever idea, though I can’t imagine how long it took.

I’ll have to take an afternoon off to see the Publishing Modernism exhibit, which is open through October, 28, 2011. Just don't drop by on a weekend expecting to get your Bauhaus on.